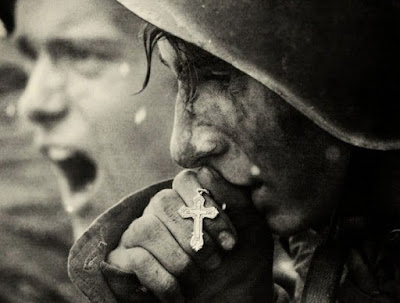 So many times Christ would gather His chosen disciples around Him on the shores of the Sea of Galilee and looking out beyond its waves would say, "Let us go to the other side." How many times did they all jump into a boat, make that trip across and after a few hours, arrive at the other side of the lake and carry on, not looking back? Many times!

And so, when I often think about this particular "passage" (Mark 4:35-41), I'm often tempted to wonder why... how Christ could sleep at the back of a fishing boat in the midst of a ferocious storm at sea. I imagine the scene - the four apostles who were professional fishermen, Peter, Andrew, James and John - shouting orders, pulling on the ropes, trying to prevent the sail from tearing, or the boat capsizing, swinging themselves from one side of the boat to the other, following instinctively the drill they had so often times repeated.

Then, I think of the other apostles who were more "city slickers" - their hands clutching into the wood of the boat, fearing for their lives, panicking, screaming. Matthew, I can see him, sea sick, his face green, throwing up and maybe moaning to himself, "I knew I shouldn't have had that fish taco".  I can imagine an educated Philip, who could speak Greek. I'm sure he had some colorful words for St. Peter! Or Thomas, who dreamed of following Our Lord into Jerusalem and dying heroically with Him there, now looking at a watery grave, thinking to himself that this was not the way he imagined himself dying.

I imagine pandemonium at the front of the boat, as if they were in a battle with Moby Dick, but at the back, - there's Christ, sleeping. Sleeping? And even though we see the apostles fighting for their lives to control the boat in an episode like the battle for the South Pacific, and with huge waves crashing over a vessel quickly taking on water, the writer of the Gospel also notes, to highlight that our Lord is in another world, that the Lord is sleeping soundly, with “a pillow” under His head! Incredible!!! No wonder the had to shout at Him, “Waken up!”

But remember, as they headed down to the harbor earlier that day, Christ told them as He no doubt often did, "Let us go to the other side." Sometimes when we reach our goal, our destination safely, it's easy to forget that he was the one responsible for initiating it.  But oftentimes, when we get caught up in a storm, when we are only half way there and get stuck, how easy it is in our fear and anxiety, to forget that he said those words, "Let us go to the other side". That means we "will" arrive safely at our destination. After all, he is a man of His word and he does not abandon His ship. Our faith in His word, in the strength of His sacred vessel, the Church, must be stronger than our fear is of this world.

So, how do we sail our ship? I take comfort from St Augustine. At a time when the city of Rome was sacked, the Roman Empire was beginning to crumble and His city was besieged, the saint did not lose His cool. Instead, reflecting on the Gospel he reminds us that when you have to listen to abuse because of our Christian faith and sometimes having to take it on the chin, that means you are being buffeted by strong winds. But he also warns us. When anger is aroused, yes, it is like being tossed around by the waves… but be careful. The temptation to retaliate and to get even, brings with it another kind of misfortune of being caught in a storm at sea – shipwreck. (cf. Sermon 63.1-3).

So, what is our lesson? Every morning, Our Lord tells us, "Let us go to the other side".  He knows the destination of every path and the challenges we will face on every side.  Listen to His direction.  Learn from him, even when you find yourself being tossed about, in a panic or up to your neck in it!

Even in the greatest storm, in Him there is no panic, nor is there fear - only peace.  They could have rode out the storm because Christ was with them in the midst of it - they were always safe. In fact, the sleeping Christ had more faith in His sailors than they had in Him as their savior!

Let us pray that

1.  We will never take for granted the Lord's advice regardless of how many times we've heard it,

2.  That we will never panic in the midst of the storm, assured that God trusts himself in our hands as much as we do in His and

3.  That we will never let pride or forgetfulness ever get in the way of us asking Him to come to our rescue.

Our Lady of Safe Refuge, Pray for us!

This weekend, having listened to God’s Word I want us to now reflect on expectations, and on the virtue of hope.  Consider the miracles perf... 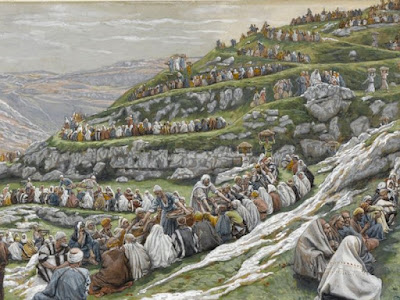