Meditation for Advent and Christmastide

The following exercise is based on the ancient Christian practice of Lectio Divina. At the center is a short reading from the Bible.

By first opening the mind to our own memories and life experiences, we can touch the Scriptures, allowing God’s Word to respond in a way we can personally appreciate.

This approach respects the fact that when we enter into dialogue with God we do so with our mind, body and soul already affected by the world we live in and the experiences we already have.

Like a “power nap”, ideally one should mark out at least 20 minutes and find a place where you know you will not be disturbed. At best, this exercise could be printed out or if on a smartphone screen, consider engaging the airplane mode for the duration of the meditation.

When you are ready to begin, first be conscious of your breathing and your body.  This is an invitation to the Holy Spirit, the breath of God Who dwells in your body, His Temple.

Remembering: Have you ever watched a Christmas play, maybe put on by children? What is the typical reaction of parents and teachers during the performance? Have you ever seen a child being born? What was it like or how do you imagine the reaction of those in the room, from parents, doctors and nurses? How prepared do you think everyone is at that moment?

Read: Luke 2: 1-20
In those days Caesar Augustus issued a decree that a census should be taken of the entire Roman world. (This was the first census that took place while Quirinius was governor of Syria.) And everyone went to their own town to register. So Joseph also went up from the town of Nazareth in Galilee to Judea, to Bethlehem the town of David, because he belonged to the house and line of David. He went there to register with Mary, who was pledged to be married to him and was expecting a child. While they were there, the time came for the baby to be born, and she gave birth to her firstborn, a son. She wrapped him in cloths and placed him in a manger, because there was no guest room available for them.
And there were shepherds living out in the fields nearby, keeping watch over their flocks at night. An angel of the Lord appeared to them, and the glory of the Lord shone around them, and they were terrified. But the angel said to them, “Do not be afraid. I bring you good news that will cause great joy for all the people. Today in the town of David a Savior has been born to you; he is the Messiah, the Lord. This will be a sign to you: You will find a baby wrapped in cloths and lying in a manger.”
Suddenly a great company of the heavenly host appeared with the angel, praising God and saying, “Glory to God in the highest heaven and on earth peace to those on whom his favor rests.”
When the angels had left them and gone into heaven, the shepherds said to one another, “Let’s go to Bethlehem and see this thing that has happened, which the Lord has told us about.”
So they hurried off and found Mary and Joseph, and the baby, who was lying in the manger. When they had seen him, they spread the word concerning what had been told them about this child, and all who heard it were amazed at what the shepherds said to them. But Mary treasured up all these things and pondered them in her heart.
The shepherds returned, glorifying and praising God for all the things they had heard and seen, which were just as they had been told.
On the eighth day, when it was time to circumcise the child, he was named Jesus, the name the angel had given him before he was conceived

Reflect : God could have simply revealed His power and His presence instantly and brought the whole world to a standstill. Instead, the God and architect of the universe became embodied (what we call the “incarnation”) in a vulnerable baby boy and was born in a makeshift animal shelter outside of an obscure village.

Review : From the Virgin Mary and St. Joseph’s perspective how did the birth of Jesus in these circumstances prepare them? 1. They learned quickly the realities of life 2. They had to “grow up” and learn how to cope. 3. They trusted that God would always protect them. 4. That hardship and sacrifices are always the best teachers.

Respond : From your own perspective when you find yourself thrown into unpredictable circumstances do you 1. Find yourself overwhelmed? 2. Wait out the storm? 3. Try to figure your way out? 4. Ask for help? 5. Go with the flow hoping it can only get better? 6. Take it slow and steady, stopping and starting anew as it unfolds?

After reflecting on your divine placement in the plan of God,

Heavenly Father,
You formed me in your own image
and entrusted the whole world to my care,
so that in serving you alone, the Creator,
I might have influence over all your works.
And when through disobedience I had severed friendship with you,
you did not abandon me to despair.
For you came to us by a small child so I might seek and find you and through your Son, to look forward to salvation.
He shared our human nature
in all things but sin.
To the poor he proclaimed the good news of salvation,
to prisoners, freedom,
and to the sorrowful of heart, joy.
To accomplish your plan,
he gave himself up to death,
and, rising from the dead,
he destroyed death and restored life.
And that I might live no longer for myself
but for him who died and rose again for us,
he sent the Holy Spirit from you, Father,
as the first fruits for those who believe,
so that, bringing to perfection his work in the world,
he might sanctify all of creation to its perfection.
Father, may I receive that same Holy Spirit, through Christ our Lord.
Amen

The Lord's Prayer - say it slowly and carefully.

Our Father, Who art in heaven,

Hallowed be Thy Name.

Thy Will be done, on earth as it is in Heaven.

Give us this day our daily bread.

And forgive us our trespasses,

as we forgive those who trespass against us.

And lead us not into temptation,

but deliver us from evil.”

Finally, take note of your breathing, your body and how your spirit is now. Remind yourself not to forget this present moment.

You can return and enter this to this same meditation again, with a fresher insight of one’s soul. Like any physical exercise, it will mean a commitment to a regular time and place, even repeating the same exercise to slowly build up a discipline of loving God with your mind, heart, body and soul.

You can’t teach sins away!

St. John the Baptist had attracted many people by his message of repentance and the need for conversion in preparation for the arrival of Ch... 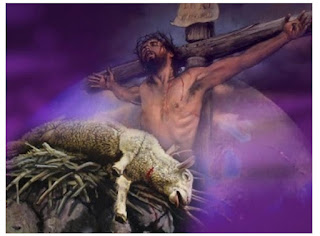