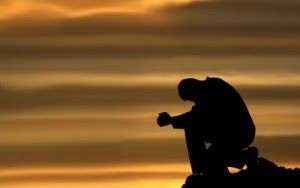 Watching him pray, his disciples could see that Our Blessed Lord was intimately in touch with heaven. In a way it was “written all over his face”, but this was more noticeable when the Lord would go to "certain places" to be alone in prayer.

For example, this is what you do when you come in early and sit in the church, when you look around and gaze at the sacred images wondering how they might reflect a little glimpse of heaven in our direction. Prayer is when we light a candle, and our focus becomes, not inward, but a reaching out through the darkness of this world to the beyond.  Prayer is following the trail of incense as it drifts upward to heaven. It is the words of scripture, which are presented in the selected passages from the bible, or have been weaved together into conversations with God, which we have come to know by heart, or try to make our own. Prayer is the raising of the heart and soul, reaching out to heaven.


The first place for prayer is actually not here in the church building. It’s at home in your own house.  We come to the church to give thanks to God for all the blessings we have received during this past week, and we offer our prayers and sacrifices to him God for our own good and the good of all his holy Church as we begin another week.
But, every day, our homes are sacred places.  It is there we are to find a place to pray every day. But increasingly our homes can become noisy places, cluttered places, and busy places.  This is why it is always good that there be a sacred space in your home, a place where you can withdraw to, to bring the family around, to pray especially the familiar sacred words that have been passed down to us from generation to generation, and where our minds can focus on the sights and sounds of heaven. And even to ask,  “Lord, teach us to pray”.
Christ does teach us how to pray. In fact, he gives us a formula, a template, words to say. “Our Father, who art in heaven…” - Listen to them as if the Lord himself where teaching you these words, asking you to ponder on the deep meaning that each verse has for all of us and every time we bring these divine words to our mind and lips, to allow them to sink deeper and deeper into our soul.
As we ask Christ to teach us to pray, consider who taught him! As he grew up, Mary would have helped him to say his first words, how to read the scriptures, how to pray according to the tradition of the Chosen People.  In her teenage years her own words to the angel, “Be it done unto me, according to thy will”, seem to echo through the verse of the Lord’s Prayer, “Thy will be done on earth as it is in heaven”. And when Christ was alone in the garden of Gethsemane, hours, I’m sure he thought of his mother and her words to the angel message thirty years ago he himself prayed to his Father, “Not my will, but Thine be done.”
Prayer is not a nicety of Christian life; it is allowing Christ to pray through us, so that his words become our own.  In this Holy Mass, let our prayer be united with Calvary in the greatest prayer that ever reached heaven. 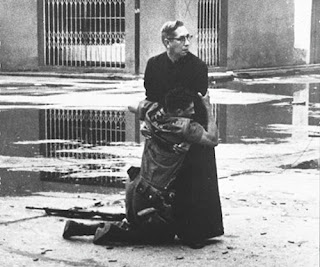 The individual on the journey is you and me. We have left Jerusalem. In other words, we are far from where God lives. In this way of retelling the parable (allow me to use the second person to better illustrate the reflection), the road takes you to Jericho, a symbolic place of being far from heaven. On this lonely road hostile forces easily prey upon and overpower you, robbing you of your dignity and wealth. You might as well be dead. The Jewish priest and Levite represent the Old Testament way of doing things, but in itself it has no power to bring us to our feet.

The Good Samaritan is Christ himself who leaves the heavenly Jerusalem and travels the road searching us out. We are far from home. Christ sees our wounds, our sins. He is not repulsed by them, regardless of how deep the wound is in our soul. Instead, he reaches out and touches them, bandages them with the sacraments of healing, which are confession and the anointing of the sick.

Oil poured upon wounds can comfort, as Christ’s presence ultimately does. But Christ, the Good Samaritan, also pours wine over the wounds. That can hurt and even sting for a while as does Christ’s words when spoken in judgment even to a Christian, so as to draw out into the open a poisonous infection which if left untreated can kill even the soul itself.

Christ then reaches down to lift you up, to carry you to a safe place. The refuge of the inn, we should look upon as the Church and the innkeeper is the bishop or pastor. In other words, within the field hospital of Christ’s Church the wounded can be brought to full health, always under the watchful eye of the bishop or the pastor who, as a successor to the apostles, has received treasures from Christ (the two silver coins) and the responsibility to spend it towards salvation. (cf. John 21:15, “Christ’s words to Peter, “Feed my lambs”) The Samaritan tells the innkeeper that he will return. Christ has told us that he too will return and we must be ready to give a full account of the gifts he has given us.

Too often we do not realize that we are on a dangerous road that can take us further and further away from God, a road that can lead to hell. Weakened in body and wounded in soul by sins along the way, it is sometimes good fortune to collapse in the middle of the road rather than arriving at the point of no return.

Christ’s Church is identified, like the Good Samaritan’s inn, as a unique place where God’s mercy, through the sacrament of reconciliation, is celebrated and full recovery is sought. Within its walls, the innkeeper will also provide, when the traveler is strong enough, a meal – this Holy Eucharist, Christ’s resurrected Body and Blood, the divine remedy for the tired body and wounded soul, the strength we need to continue the journey, this time not down hill but on to the road that leads us up hill towards the heavenly city.
at July 13, 2019

walking together, knocking on doors 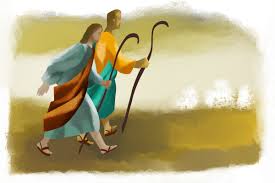 Luke 10: 1-12
How do we as Christians transform our society and culture to reflect the Kingdom of God - the influential grace of Christ’s presence His Church can bring about in our world?
Or, maybe a more fundamental question we need to reflect upon is do we want Christ’s influence in our society or would it instead be preferable to keep his influence private and personal?
Consider again the Gospel we have just listen to. Christ himself is not content simply to forge private relationships. We see him forming a team to go out and engage the world. And there is a sense of urgency. It is also dangerous, because to accept the whole message of Christ’s Good News will necessarily involve a change of values, new types of relationships, a new structure for society.
This is because in this portion of the gospel, Christ sends his team out, not to debate, form committees or to set up programs. We already have all that! Instead, what he offers seems rather drastic - “Here is the message of salvation, take it or leave it. Live it wholeheartedly or ignore it completely”. In other words, you cannot sit on the fence. You have to, at some point, make a radical decision first.
But notice how Christ’s team of disciples present him and his radical message of the Good News of salvation. Christ does not send them out like an army of stormtroopers or on horses like knights in shining armor. They do not break down doors, make forced entry or arrive at your house like city code inspectors. Instead, the first word they are to communicate is “peace” - shalom. Peace, not a generic peace, but a communication of God‘s peace - the same peace that the angels of Bethlehem announced to the world when Christ was born: “Glory to God in the highest, and on earth, peace to people of goodwill.”
The Good News of the Kingdom of God resonates with that divine peace and goodwill. When we resonate with it, another door is open, a door that Christ himself can enter into and be received. But what if the door is closed in our face? Do we try to break in, force the lock or stand outside annoyed or angry, thumping the door until we force someone to open it?
In the portion of the gospel we have just heard, Christ simply says, move on. You’ve said your piece (peace). Seek out instead households, communities, and individuals of goodwill – even in the midst of the battlefield.
If you want a graphic example of this in action, you only have to look at the events that took place on Calvary. While he was being tortured and slowly crucified to death, Christ did not respond with anger, nor did he engage in a debate, nor did he turn up the heat or call down fire from heaven. Instead he prayed asking his heavenly father to forgive them all, all of them.
Even in the midst of conflict and violence, the Gospel of Peace on earth that Christ witnessed to, did not close doors. It opened the door to heaven to a thief who was crucified alongside him. It opened the door of a Roman soldier’s heart who witnessed the way our Lord died after being crucified. Both the thief and the soldier where in the right place at the right time when the peace of Christ passed by their house. They recognized the unique opportunity, they open the door and they let Christ enter.
Christ will not send any of us out to change the world, nor will we have any chance of doing so, if we have not first heard him knocking at our own door, and in a decisive moment, welcomed him in and accepted his gift of peace.
We have this opportunity here and now as we enter into the sacrifice of the Mass and prepare ourselves for Holy Communion with Christ, bringer of a new world order initiated by his death and resurrection. When he knocks at your door, in whatever form he takes, please open it, accept his gift of peace and invite him to stay with you. Offer him the charity of your food and drink. Then you can invite your neighbors in and introduce him to them, one by one.
at July 06, 2019

We often hear this phrase, “The Kingdom of God ''.  We even pray, “Thy Kingdom Come”.  This “Kingdom” was the hallmark of Our Lord... 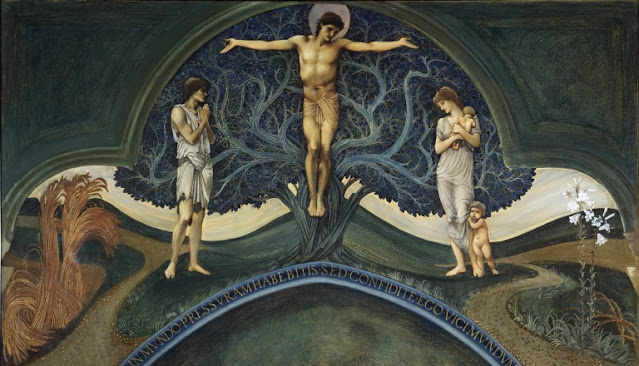